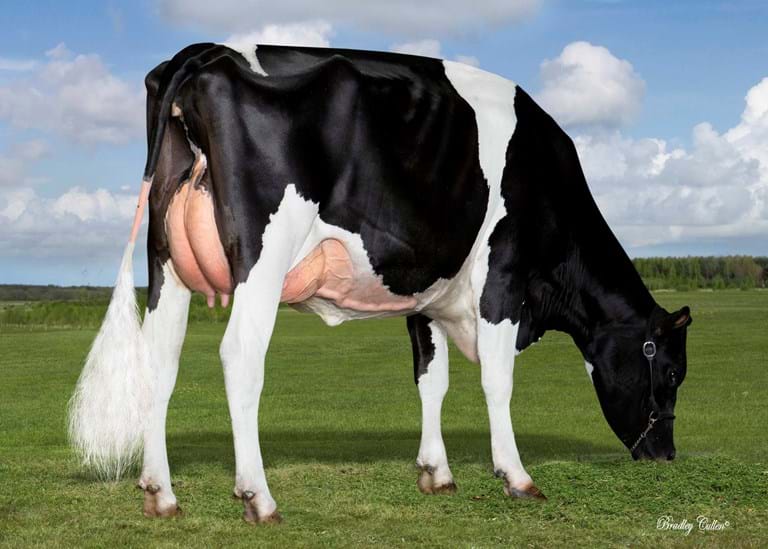 The January proof release clearly shows an increased rate of genetic gain for the Holstein breed in Australia, according to Rohan Butler, Holstein Australia’s Genetic Improvement and Research Manager.

“In genetic terms if we are getting things right the newest generation of heifers should start to replace the older cows on our lists, which is happening increasingly frequently. The real news though is the overall BPI gain across the board,” says Rohan.

Every month Holstein Australia publishes two lists of genomic tested registered females, one being the best young females with their  first genomic breeding value and the other being the top list of all genomic tested females (irrespective of age).

“Going back to June 2018, Donovan’s Griff 21017 went straight in to top spot on the new heifers list by an appreciable margin with 342BPI, some 25 points above the then second ranked heifer, and straight in to 9th spot on the top cows list. Since then her BPI has increased to 352, which puts her two spots lower on the current top cow list rather than higher.

“If her BPI had remained at 342, she wouldn’t make the top 20 list. The top new heifer this month, Glomar Chairman Lady 6548-ET, with a BPI of 367, is another 25 points further on from where Donovan’s Griff 21017 was back in June 2018. Every indicator says that we are seeing an increase in the genetic gain of the Holstein breed in Australia,” says Rohan.

So why the ‘sudden’ change? Look a little closer and it is perhaps not that sudden, but more a logical progression. To get young heifers to be better than their mothers, bulls that are also as good, if not better than the female side of the pedigree, are required. And that is what is happening.

When the animals on this month’s top heifer list were conceived, Chairman was number 1 bull, Perseus equal number 2, with MVP also high up. Between them they sired eight of the top ten new heifers in the January proof run (Chairman 5, Perseus 1, MVP 2).

The other common factor, according to Holstein Australia CEO, Graeme Gillan, is great depth of pedigree.

“We’ve got high genetic merit sires mated to strong cow families almost all the way through these lists, and the result is what appears to be a sudden increase in values. However, I would challenge that and say there is nothing sudden about it. More than that, it is planned.

“The marked increase in the rate of genetic gain we are seeing is the result of, in some cases, many years of careful  selection and long term investment by breeders in their herds. The impact of the use of high genetic merit animals is, I think, becoming much clearer.

“It is going to be interesting to track the progress of the breed month-on-month this year, particularly where we have young bulls that rank highly in the Good Bulls Guide coupled with high genetic merit females, all of which we can track more accurately than ever before through genomics,” says Graeme.