From Appendix Register to elite animal 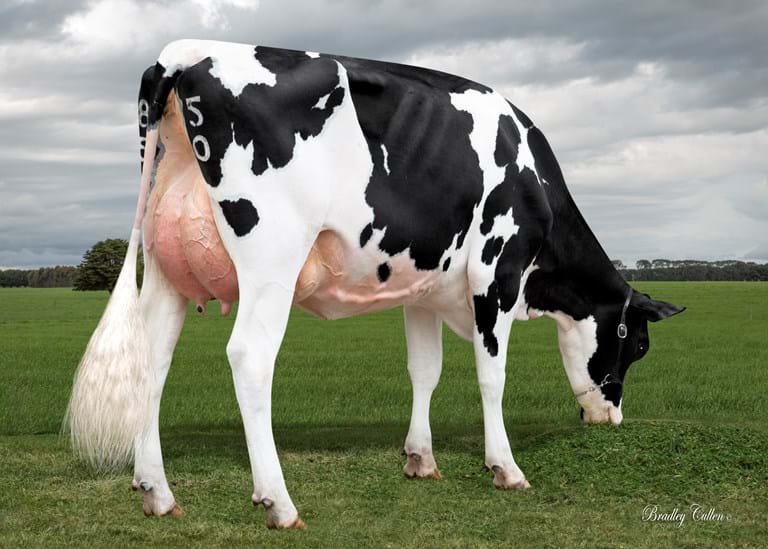 Numeralla Delta 1427 6160, owned by Liam Ryan, Numeralla Holsteins, tops the March 2019 Holstein Australia list of best young females with their first genomic breeding value with 351BPI, with another four Numeralla cows featuring on this list. She also goes straight onto the list of all genomic tested females (irrespective of age) at number 12.

“Our focus at Numeralla is on functional, high production cows,” says Liam Ryan. “We’ve got what is a commercial herd focus but with some pretty elite production animals. Back in my teens we had two of the highest production dairy cows at the time just down the road at Devondale Holsteins. We bought an animal from that herd and I persuaded my dad we should start registering. We started with just one heifer under the appendix system.

“This is the first lot of genomic testing we’ve done – over 100 animals in total. I knew from our herd testing we were on track with our breeding program, but we’ve gone down the genomics route to provide confirmation of that, and also now we’ve got the farm really established, to help market our herd. I was expecting our genomics results to provide the confirmation we were looking for, but I wasn’t expecting to get 5 of the top 20 new genomic females.  Really pleased.”

Bryan Dickson of Emu Banks says: “We’ve genomically tested all our Holsteins from the first year it was available, and its worked for us as a breeding and selection tool, science rather than subjectivity. I think we tested something like 600 heifer calves last year. In simple terms it helps with decisions, makes things really clear cut.

“Both our cows in the all genomic tested females list were sired by Chairman, and their dam was sired by our own, and what was the number 1 bull at the time, Emu Banks Christmas. The degree of accuracy you get with genomics continues to improve and I would say is now proving to be better than the sire pathway.”

Holstein Australia CEO, Graeme Gillan, says: “I think it’s a case of the cream rising to the top, and the breed continuing to progress. The top heifer this month is over 30BPI points higher than in the February run. We also now have a new herd in the system, with its genetic potential clear for all to see.

“We’re also seeing increasing numbers of Holstein Australia members using genomics to make - no pun intended - black and white commercial decisions to progress their herds, whether they are breeding for type, production or health traits.”